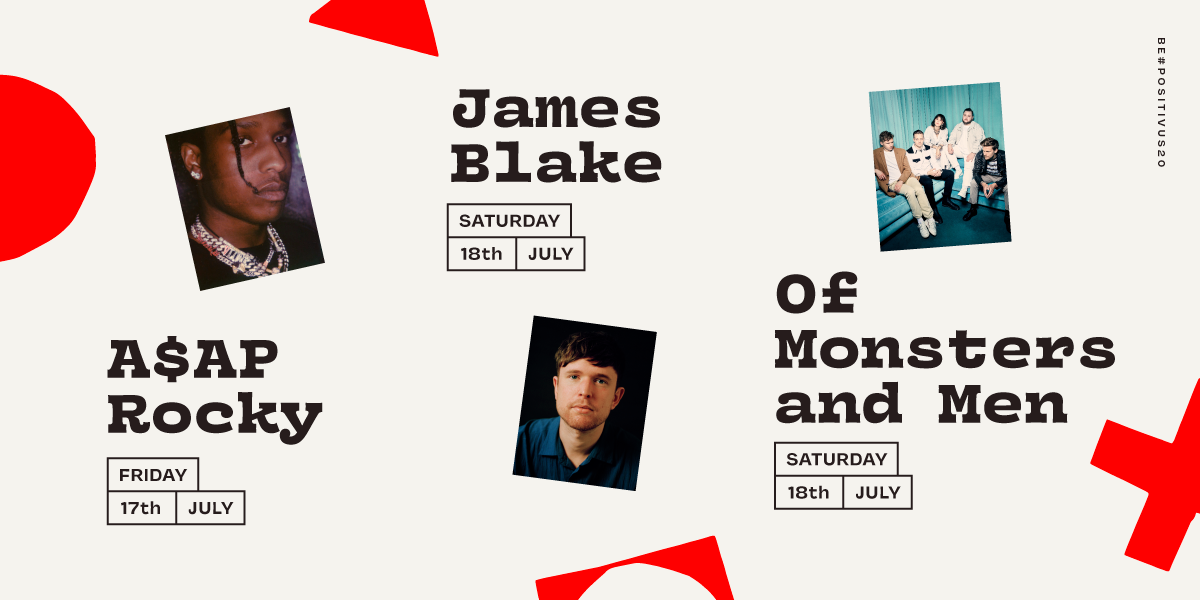 It’s always more fun to you share the festival experience with your festival squad! Buy ​your festival ​ticket​ ​together with five friends and save. The group ticket​ discount​ ​is​ available​​ for​ a group of six people buying the 2-Day​ Festival tickets​ with​ or without​ ​Camping Site ticket.

Versatile, mysterious and outstanding in every music genre who he represents – on Saturday, July 18th British producer, pianist and singer James Blake will perform at Positivus festival. Some might say he is recognized as a very successful producer. Some might say they know the artist because of electronic dance music scene. Some might have heard his and Beyoncé song “Forward” or his and Kendrick Lamar song “King's Dead”. Others will sustain that he has the most exciting falsetto. He has managed to create not a single persona for James Blake: he has gone way beyond his own limits.

OF MONSTERS AND MEN ADDED TO POSITIVUS FESTIVAL LINE-UP

From the talk of Iceland to the top of the global conversation. Of Monsters and Men is added to Positivus festival line-up alongside already announced A$AP Rocky. The Early Bird tickets are on sale until December 31st.

Hip-Hop icon A$AP Rocky is the first announced artist for next years Positivus Festival. Innovator, disruptor, designer, creative director, entrepreneur and evolutionary are some words that come to mind when to describe the artist. He will perform on Friday - July 17th. The Early Bird tickets are on sale until December 31st.

In the summer of 2020 Positivus Festival will return for the 14th time on JULY 17 and 18, filling the beautiful coastal venue in Salacgriva with more dazzling live shows from well-known and established stars, cutting edge emerging artists, a large number of Baltic acts and other surprises that are not to be missed.

The 13th edition of Positivus Festival is so close, over the course of two days from 26 – 27 July we will see artists like The 1975, Disclosure, Underworld, Royal Blood, Ivan Dorn, Cut Copy, Elderbrook, Daddy Was A Milkman, Ewert and The Two Dragons and many more on the various stages amidst a dreamy forest setting.

Just like every year, apart from a wide musical line-up Positivus Festival offers a real gourmet film program for some slow and relaxing enjoyment in-between the concerts. This summer together with Kino Bize cinema on both festival days festival goers will be able to see  the newest movies made in Latvia and also classics.

Every year Positivus carefully plans special festival program for the small visitors and has organized an entire territory for kids – Kids Island. While parents will enjoy the festival, kids will have a chance to play games, have sports activities and enjoy adventures that develop their intelligence – and this is only a part of the generous program that will keep busy and entertain the festival’s youngest visitors.